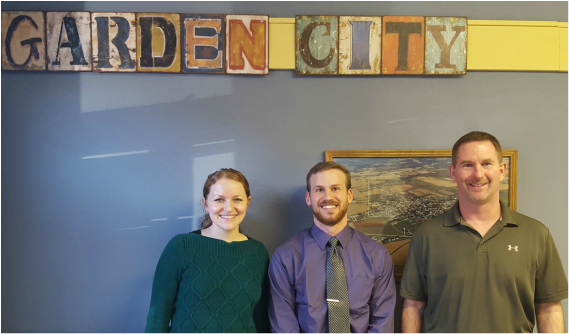 Monona Chamber & Economic Development, Inc. held its annual meeting on Thursday, March 17 at its offices at 103 W. Center St.  The board is pleased to announce the election of its new directors for three-year terms effective April 1, 2016 through March 31, 2019.  Accepting the terms of office are David Ross, high school principal at MFL MarMac Community School; Alex Steege, loan officer at FreedomBank of Monona; and, Dr. Jessica Wilke, a partner with Family Dentistry Associates of Monona (photo attached).

Effective March 31, 2016, Kelly Bulman, owner of Bruns & James Insurance, and Harold Waterman, owner of Studio 91 LLC, will be retiring from the board after six and three years served, respectively.  On behalf of the chamber board, President Brent Formanek, co-owner of Superior Building Centers, praised both Bulman and Waterman for their volunteerism and service provided to make Monona a better place in which to live and work and he presented them with appreciation plaques.  Look for the duo’s photo to appear in next week’s edition and on the chamber’s Facebook page.

Incorporated March 27, 2009, Monona Chamber & Economic Development, Inc.’s mission is “to lead economic growth and vitality of the community of Monona, and to support the civic, social and natural resources of the surrounding area.”  Bylaws allow for as few as seven, and as many as eleven, directors; presently there are nine voting directors.  Non-voting ex-officio members Canton and Mayor Collins, who also serve respectively as secretary and treasurer, regularly attend board meetings and bring their knowledge and expertise to the board’s discussions.  To get involved or learn more about the chamber or its board of directors, please visit mononachamber.com/board-of-directors.html or contact executive director Rogeta Halvorson at (563) 539-8340.